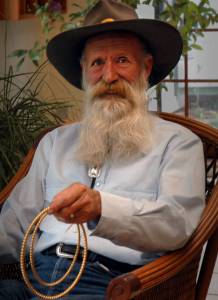 Slim Spurling was in born in Aberdeen, South Dakota, settling on a small ranch near Morrison, Colorado, following World War II; attended rural schools, Colorado Military Academy and Mullen H.S. He obtained a Bachelor of Science degree at Colorado State University, majoring in Forestry and Botany, minoring in Mycology, Biochemistry and Microbiology. He was Honorably Discharged from the U.S. Naval Air Reserve.

His life experiences included a twenty-year career as an artist-blacksmith and founder of the largest school of blacksmithing in the USA in the 1970's. His first student is the Founder and Curator of the National Blacksmiths Museum in Memphis, Tennessee.

A keen interest in metaphysics developed with an out-of-body-experience during college years and two near-death-experiences.

Slim began practicing the ancient art of dowsing in 1970 and invented a very simple and inexpensive method of neutralizing geopathic stress. He was an internationally recognized expert in the art; giving seminars several times annually in the U.S., Canada, Europe, South America and South Africa. 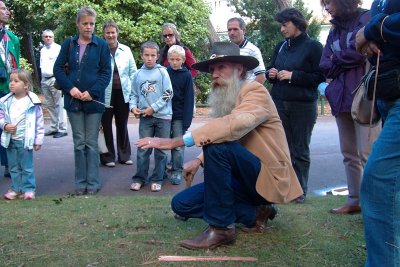 He co-founded the Geobiology Research Association in 1993. The Association is a network of student-associates who practice the art of dowsing for and diverting geopathic stress to alleviate various physical, mental or emotional symptoms for members of households or business enterprises. Field reports from full and part-time practitioners form a body of evidence for the reality of geopathic stress and the fact that it can be eliminated.

Slim began research in subtle energy phenomena and technologies in 1985. In 1991 he invented a device now known as the Light-Life™ Ring. Further inventions based on this technology are the Acu-Vac Coil™, the Feedback Loop™ and the Harmonizer™. These Light-Life™ Tools, which are room temperature super-conductors, produce positive subtle energy effects in areas as diverse as pain relief; enhanced healing ability of the body in injury or illness; improving water quality; air pollution abatement; certain types of insect control, and increased plant growth.

The techniques and technologies for personal and environmental health are now recognized and put into practice by a small but growing network of associate researchers worldwide who are keenly interested in these issues of health and environment. Seminars and products are available through this website and the network.

Slim moved on to the higher realms on 12th November 2007 and is greatly missed by those that knew him.